January 27 marks the anniversary of the liberation of Auschwitz-Birkenau, the largest Nazi death camp. In 2005, the United Nations General Assembly designated this day as International Holocaust Remembrance Day (IHRD), an annual day of commemoration to honor the victims of the Nazi era.

The U.N. resolution that created IHRD urges member nations to develop programs dedicated “to remembrance and education, in order to help prevent future acts of genocide.” The resolution rejects denial of the Holocaust and condemns discrimination and violence based on religion or ethnicity. 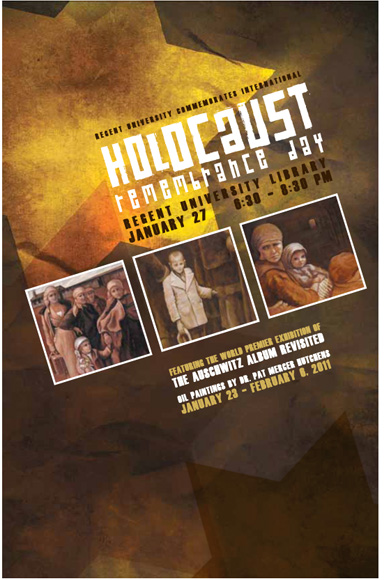 In commemoration of International Holocaust Remembrance Day 2011, Regent University Library hosted the world premiere of "The Auschwitz Album Revisited," a series of oil paintings by artist Pat Mercer Hutchens. The exhibit will officially be opened on January 27th, 2011, with a special Remembrance Day Service featuring artist Pat Mercer Hutchens, cantor Ron Wexler, Rabbi Israel Zoberman, and Holocaust survivor David Katz. The paintings were on public display from January 23rd through February 18th before being taken to the Krakow Jewish Cultural Festival in Poland.

This award-winning film is considered the most comprehensive and realistic attempt at documenting SHOAH. Nearly 10 hours long, it was shown on January 27th, 2011, International Holocaust Remembrance Day, in the Library Auditorium.

Film description: "The Nazi extermination of Jews is examined through interviews of survivors, witnesses, and perpetrators and through footage of the sites of the death camps and environs as they appear today. Those interviewed include Jewish survivors of the death camps and the Warsaw ghetto uprising, Polish farmers and villagers who lived near the camps, and Nazis who worked in the camps and the ghettos."

The Common Read at Regent University was an opportunity for all members of our community to read Night by Elie Wiesel and then come together for healthy discussion, debate, and exploration of the themes, characters, and redemptive qualities presented in the book. On February 17th, 2011, the School of Communication & the Arts hosted a dramatic reading and book discussion of Night.