Rev. Jerrell H. Miller, the editor of a monthly revival newspaper called The Remnant, donated copies of twelve years of this publication to Regent University Library Special Collections in 2014. The newspaper reflects a prophetic stream of the Pentecostal movement. It features many articles on the Brownsville Revival that began in June 1995 at Brownsville Assemblies of God Church near Pensacola, Florida.

The Brownsville Revival lasted for nearly ten years, touched the lives of thousands of individuals, and had a global impact, spreading revival flames to many churches throughout the world. During the peak of the revival, more than 4 million people attended the meetings. In addition to the United States, they came from at least 34 countries, including Japan, England, India, South Africa, France, Canada, Australia, and the Philippines. According to Miller, many Methodists, Pentecostals, Anglicans, Presbyterians, and even Mormons came to Brownsville to encounter God. Several luminaries in modern Pentecostal/Charismatic circles, including Paul Yongi Cho, Reinhard Bonnke, and Thomas Trask (then General Superintendent of the Assemblies of God), graced the pulpit at Brownsville and addressed worshipers hungry for the touch of God.

It is estimated that about 200,000 people gave their lives to Jesus Christ during this revival. Many societal outcasts were supernaturally delivered and set free from their addictions and lifestyles. Out of this great move of God was birthed the Brownsville Revival School of Ministry, which trained hundreds for ministry and missions work and spread the revival fire throughout the globe. Brownsville Church did not keep an official record of the healings that took place during the revival, but a large number of people were miraculously healed of various diseases, including cancer tumors. Some of their stories are represented in this collection.

In addition to having a detailed chronicle of the Brownsville Revival, The Remnant newspaper covers other revivals occurring during the same period, which are likely to be of interest to those doing research in the history of the Pentecostal, Charismatic, and other renewal movements. These include Hardeeville, Ramona, and Mobile in the U.S. and revivals in England, Japan, and Nigeria. 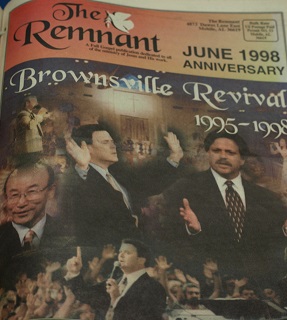